In Polarity Therapy, Dr. Randolph Stone describes a similar process as a baby in a womb being weaved by the four elements. Although he does not show the planets, they are constantly moving and activating different elemental patterns. 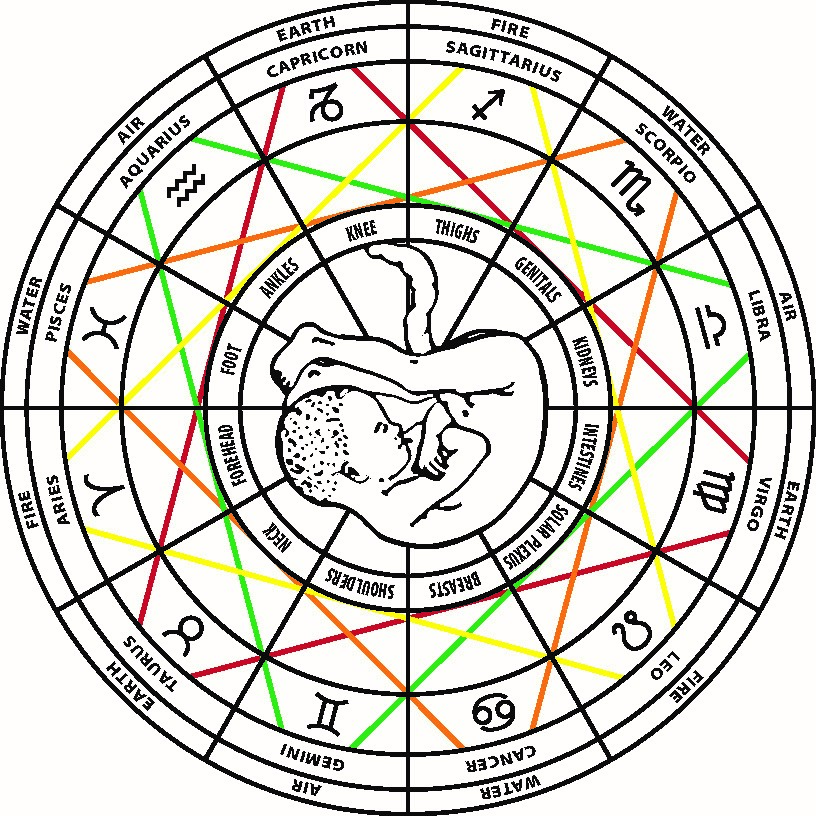 In Polarity Therapy, the Baby in the Womb represents involution[i]. The baby is trapped in a universe of elements and looking for a way through the different patterns. This same pattern is also shown in Alchemy as the Urobous or snake that is constantly devouring itself in order to return to its primal self. 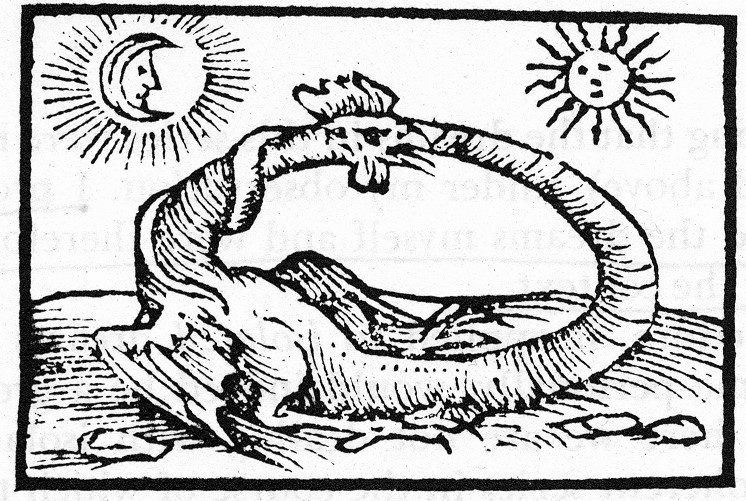 When a lower self element pattern is devoured, it comes into balance or zero, and involution transforms into evolution. Rather then looking inward to the content of the life stories weaved by the element patterns, one begins to “see the stars”. In the Greek modal system the Hypermixolydian mode resonated with the stars beyond the elements. In Polarity Therapy, Dr. Stone called this evolution. Rather then being identified with the lower self element pattern one is focused on something higher. He represented this as a man, rather then a baby, in bow position surrendered to the stars, and naturally ascending into higher states of consciousness[i]. 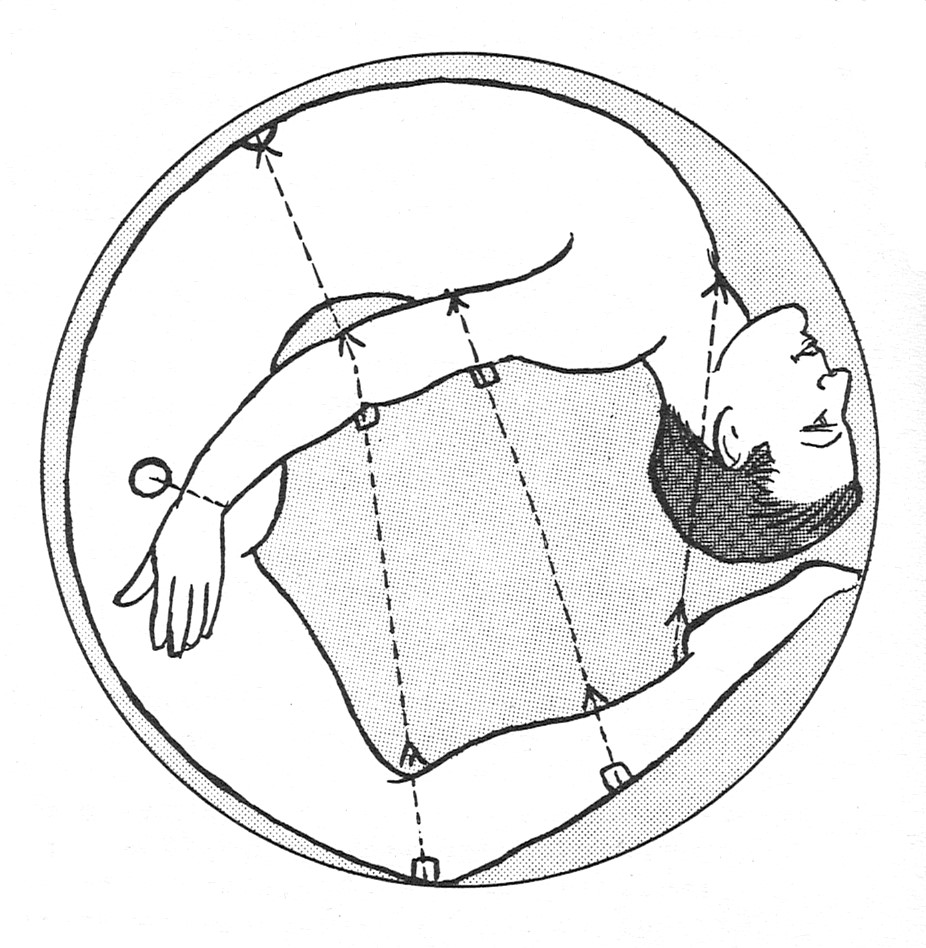 Our consciousness is always descending into distress, resolving distress, and ascending into eustress. All element patterns are good patterns and when we learn how to navigate an element pattern we become masters of the positive energy the pattern offers. Imagine a hang glider soaring like a dove in the winds. If the winds change, the hang glider simultaneously adapts to the changing pattern. If the hang glider fails to adapt, he will experience increasing levels of distress leading to a crisis. If he senses the wind change, he will creatively adapt to the new wind pattern. The more wind patterns the hang glider learns how to navigate, the greater his mastery and the greater his euphoria. The ancient sages of India referred to constantly changing element patterns as Shabda, which means the currents of Sacred Sound. These currents flow within a universe of constant energetic change. The consciousness of enlightenment requires continuing adaptation and change to these currents.

The ascension of the dove shown in higher self quintessence bottle was called “the web of Athena” by the Greeks . Dr. Stone anatomically locates the Web of Athena in the Area of the Crown Chakra and calls it  “Space of Spiritual Influx Pictured As Athena In The Head Of Zeus[i]”. 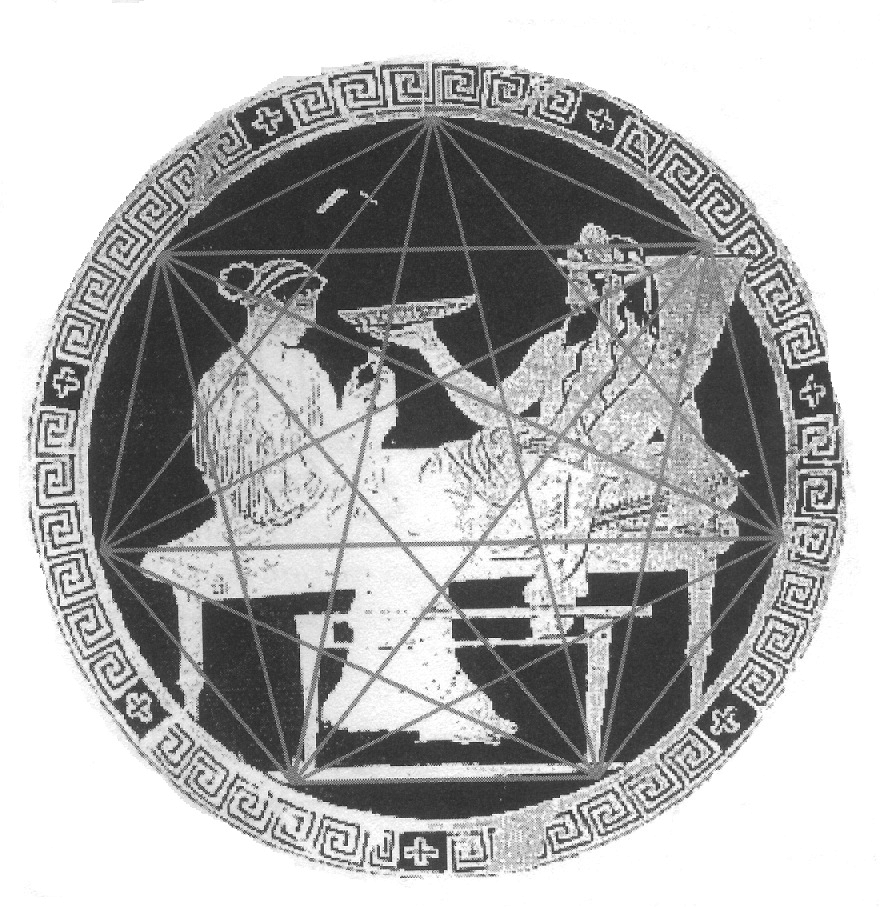 Persephone and Hades, The British Museum.

The web of Athena is a seven pointed star where each point represents a level of ascension into euphoric states of consciousness which are made up of higher self elements that also must be balanced. Just as we can get lost in our lower self distress experiences we can also get lost in the euphoria of our higher self experiences. This is what is called being caught in the Web Of Athena. To evolve, we must be able to navigate the euphoric element patterns of the higher self and the distress element patterns of the lower self.

We are the baby in the womb of elements and the alchemic dove plunging into a new pattern of elements. Our life challenges are our life opportunities. (The title of the book by Hannah Green about a young woman’s battle with schizophrenia I Never Promised You A Rose Garden” is a metaphor for the different life challenges.) Today people are encouraged to take pain killers and medications for depression and anxiety. Ideally they would be taught to deal with their life challenges as opportunities to evolve. When we deal with our challenges our body makes its own pain killers, anti-depressants, and anxiety chemicals. When we learn to transform the elements and navigate the higher states of euphoria then the process becomes our “life balancing board” on which we become like children continually discovering and rediscovering the magic and wonder of being alive.