Heather Has a New Insight…Do You Know What It Means?

We sit across from each other at a diner…a simple place in a kind of sophisticated yet quaint town, if you can imagine that. It’s sophisticated because of its unique business profile, and quaint because it seems so welcoming and connected. It is the town where Heather Principe, BS. ed., PWE, RYT, RPP built her Yoga and Polarity Center. She, however, is anything but quaint! As we gaze into each other’s wise and inquisitive eyes there is a hidden smile in the knowing connection. We have known each other for a long time. From the days of rolled head bands and leg warmers, we used to be “aerobic instructors!” Now I ask her, ” So what have you been learning lately, what is it all about?” She says, “It’s all about polarities.” I love that answer and we both laugh.

Heather has been a teacher and mentor of many Polarity Practitioners worldwide, a forerunner of sharing this powerful modality, and the bringer of spirituality into many hearts. She is known for her deep insights, her fascinating teaching attributes, her open heart and consciousness, and her dedication to sharing all this awareness. She can be edgy as she challenges your preconceived notions, yet she remains present like a true guru…the meaning of which is not only teacher, but also rock, and further, in Sanskrit: one who dispels darkness and takes you toward the light.

Having traveled extensively to learn and share Polarity she willingly gives up her gifts. Her saga within sacred American Indian learnings, having had her own grandfather “guru” of sorts, offers deep-rooted wisdom that she shares when working with clients, teaching, or holding a sweat lodge ceremony. So, I asked her to elaborate on her philosophies:

Meredith: You wanted to say it’s only the beginning!

Heather: Yes. We are only just beginning to disseminate Polarity throughout the world, and to teach what polarity means. We are coming out of the darkness and seeing ourselves in the light, into the awareness of our charged places, and starting to witness ourselves… and see if we are acting rationally or irrationally.

Meredith: Then you see “Polarity” as not such an unusual word?

Heather: Many people, great brains of the world, are people out there disseminating ideas of the predecessors of the old knowings, the Sumerian knowings, the Gnostic knowing, that all point to the Hermetic teachings that we do in polarity. It’s not just bodywork. It is a whole system of polarity…not just bi-polarity, but tri-polarity!

Meredith:  What do you mean by tripolarity?

Heather: It’s a quantum physical thing.. that if you study yoga… there is sattva, rajas, and tamas, three poles to everything. My mother used to say, ” If you convinced me and I convinced you, wouldn’t we still have two points of view?” (we laugh) And my father used to say “There is always that third point of view, that stands in the wisdom between these two places.”  That occurs emotionally and mentally, and in the physical body, because everything steps down from the etheric world into the physical material world.

Meredith: My mother used to say ” There are three sides to a story:  his, hers and the truth!”

Meredith: So things are not just a duality of black and white.

Heather: Things are not just this or that.  Things as not just black and white…there can be a multiplicity of truths. Think about our culture. Just look at politics today..we have extreme edges of realities. There is such a multiplicity of opinions out there today. As you listen to people’s beliefs, you can hardly tell where they stand on the spectrum. So all of that has to come into a place that balances the truth…and it’s not always a polarity, there is a third thing, the third thing is the truth. It’s a  tri-polarity; that truth can be a reality.

Meredith: If there is one thing you wish to tell the people of APTA, what would that be?

Heather: Oh, in closing..if you left APTA for any reason because of dissension, or unhappiness in the past, it’s time to come back because we have a whole new day happening. We have a day that includes not only polarity therapists but also, for the old fashioned blue stockings, the knowledgeable people that want to know more about polarity and incorporate it into what they are doing, the people who practice it in all their other modalities…there is room for everybody here…it’s time for them to come back! 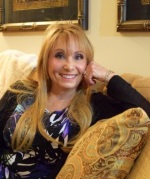 Meredith Zelman Narissi, M.S., P.T.P., a mystagogue who welcomes others into the knowledge of sacred mysteries; is a mind-body polarity therapist, an international presenter, dancer, meditation/yoga instructor, and feature writer for magazines. Her new book 7 Veils: Mystical Secrets of a Feminine Path to Enlightenment is currently available on Amazon and Barnes & Noble. Play is serious business, and Meredith uses creative joy in her lectures, workshops, and retreats to share her message: “Who you are, is the presence of love; the one love that exists for all.” Her polarity therapy practice combines insightful wisdom, with healing touch and compassionate listening. She lives in Long Island, N.Y. with her husband and two Persian cats. She loves to dance in the spiritual realm.